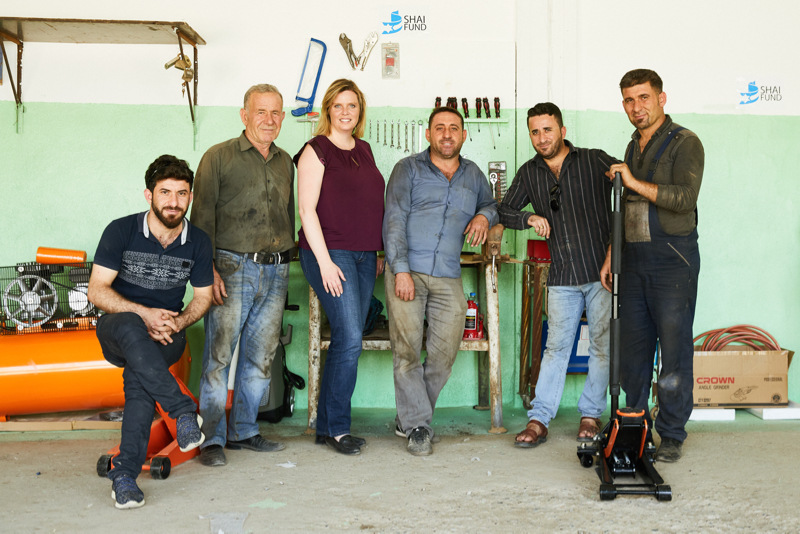 Return to the Nineveh Plains

Travels to Queregosh: Christians Return to the Nineveh Plains after Islamic State Leaves

Last month we drove in a convoy across the Nineveh Plains, Iraq. The spring rains were over, and the countryside was slowly becoming dusty as the searing heat of the summer approached.

After passing multiple checkpoints, we finally turned the cars towards devastated Christian villages. Once thriving, vibrant, green communities, today the churches, homes, and businesses were in ruins, having been decimated by the Islamic State (ISIS, or IS). Hardly a building stood intact. It was a war zone, and eerily empty.

We traveled with five families who were returning to their former homes for the first time. They fled in August 2014, when the Islamic State invaded their Christian town. The first they knew of the attack was the shelling that killed a woman and two children.

As ISIS seized territory across Mosul and Nineveh, they initially gave Christians and other non-Muslims three options: convert, pay a tax, or die. But before long they rescinded the offer to accept a tax, and instead they killed or enslaved those who did not covert. The townspeople fled en masse. Those who did not get out in time were caught, tortured, and forced to convert to Islam. The women were taken as sex slaves.

After three years of living in the cramped conditions of temporary camps in Iraq’s northern region of Kurdistan, their towns have finally been liberated. “Liberated,” the families told us, “but not free.”

Booby traps and land mines have to be cleared. Security remains a big issue. Betrayed by both the Iraqi central government and the Kurds, these Christians were left defenseless when ISIS attacked.

Not long ago, the men of the family were the first to return in order to survey what had happened to their homes and businesses. They called this “the second shock.”

The first shock was the expulsion of Christians. They have lived in this area since the first century, when Thomas the Apostle passed through here, sharing the good news of Jesus as he made his way to India and China. Now the second shock: the Islamic State had blown up and deliberately destroyed the Christians’ homes, businesses, and churches.

Crosses on church steeples were destroyed. Bibles and religious books lied burnt in large piles. Even the graveyards had been ransacked and the bones scattered across the earth for the wild animals. ISIS had systematically gone from house to house, defiling and destroying each home.

Until this day, the women had not returned. This was their first trip to their hometown—to the places where they got married and gave birth to their children. It was an emotional experience, being with them as they witnessed such destruction. They were caught between longing to return to the lives they left behind, yet scared of what the future would bring.

The level of destruction brought this into sharp relief.

Yet, like the cross they placed at the entrance to their city, hope remains. They decided to return and begin to rebuild and reclaim their homeland. Their faith inspires me.

We were here to help them take the first step in the process, offering a small spark of hope despite the destruction.

The men in the family once had a mechanic shop. Theirs, like other similar family businesses, had been passed down over the generations.

And now, they were the first business on the street to be up and running.

Many of the shop fronts up and down the street lied open and exposed to the elements. I watched as a large piece of corrugated iron fell in the wind and a door banged backwards and forwards on one hinge. On the inside, many of the buildings were blackened with soot following random explosions. Stray dogs wandered the streets.

The scene had the feeling of an apocalyptic movie. But it was all too real.

We had spent the last few days cleaning out the destroyed shop, repainting it, and buying tools, equipment and generators, so the family would be able start up their business again. The five men represented five families, with two pregnant wives. I could feel their excitement and their renewed hope now that they would be able to start working again. Beaming from ear to ear, the men stood proudly in front of the restored mechanic shop with a new banner overhead.

Before the sun set, they had already greeted their first customer!

The women who came back with us visited their family home for the first time since they fled three years ago. The house was broken and destroyed. The contents had been looted; anything of value was gone. On the floor was a dusty pile of papers, trinkets, and old clothing. It was all that remained.

The women picked through what was left of their memories. They were searching for photographs. ISIS had gone through all the homes, tearing up photos simply to destroy their memories, and ultimately to erase their identity. The invaders even decapitated a statue of Jesus in the house. Now, as the family found torn pieces of photos, they gathered them together. There wasn’t a dry eye in the room. The full horror of what had happened to these people overwhelmed us all as we stood in the destroyed building that was once a loving family home.

Weeping, the grandmother pulled a picture of Jesus out of the pile and placed it with a candle on the windowsill. Despite the dangers of returning to an empty town, these Christians had not lost their faith. In the face of persecution for their Christian beliefs, they insisted on proclaiming it with every act.

Although they were driven out of their towns and abused for their faith in Jesus, they proudly replaced the crosses that were once displayed on their buildings and in the entrances to their devastated villages. Despite warnings across the region that they would be targeted again, they flocked to their churches. Facing death, they showed their defiance by returning to their homes, villages, and places of worship on the Nineveh Plains.

Few of my trips to Iraq have been more meaningful.

Charmaine Hedding is the Executive Director and Founder of Shai Fund (U.S. registered non-profit). She has worked in Africa, Europe, the Middle and Far East as an international consultant in development management for the non-profit sector, with a particular focus on the protection of persecuted minorities.

This article first appeared in Providence Magazine on the June 19, 2017.