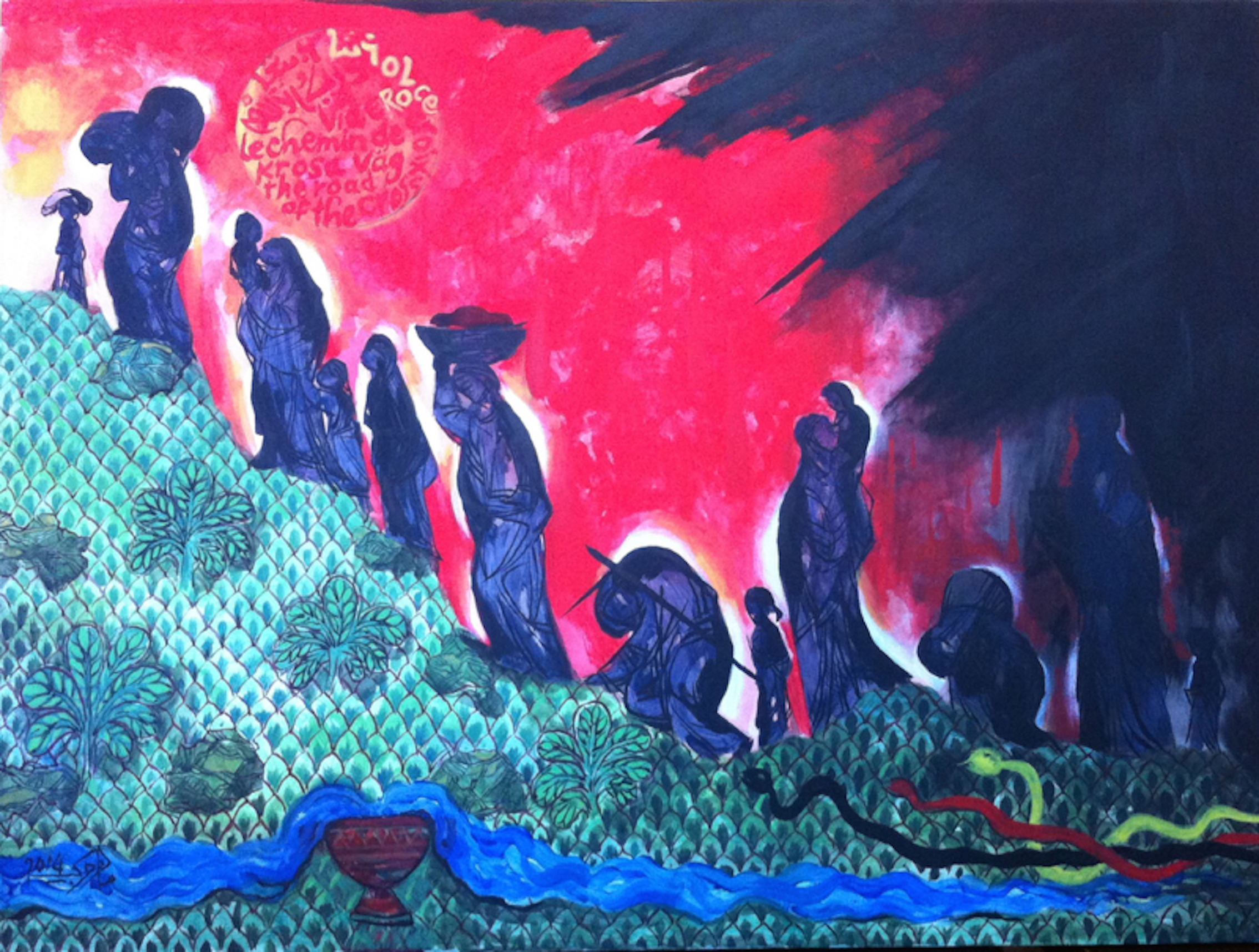 It is painful to recall the events of late summer 2014, when the Islamic State killed or expelled thousands of Christians from their historic homeland Iraq’s Nineveh Plains. Most of them fled to Erbil, Kurdistan.

Later that year, I was fortunate enough to visit the displaced survivors. By then, massive efforts had begun to provide them with basic needs – food, water, blankets, winterization of shelters and medical supplies.

Most of those Christians languished in churches, abandoned buildings and tent cities. As weeks turned to months, it became clear that fragile hopes of returning to their ISIS-occupied cities, towns and villages would not soon be fulfilled.

What would they do? Should these Christians wait in Kurdistan until they could safely return home? Or should they try to seek a new life in an adopted country?

Some, who were driven out of their homes on more than one occasion over recent years, continue to dream of starting over in distant lands, far removed from the fears that still haunt them. Unfortunately, that remains a difficult course with many obstacles.

But others yearn to return to their homes and churches in their ancestral Christian heartland. This, too, is a huge challenge. But now, at last, they are finally sensing a surge of hope.

Today a coalition of Iraqi military forces, supported by United States air power and advisors, is aggressively seeking the destruction of ISIS. Its goal is to liberate the Nineveh Plains one village and town at a time. And its No. 1 target is Mosul, Iraq’s second-largest city.

It isn’t an easy operation, to put it mildly. The liberation of the Christian town of Bartella is illustrative of the critical challenges that lie ahead. But a lifesaving miracle in Kirkuk proves that there is hope, even when dangers seem insurmountable.

“Bartella is liberated, but not free,” Father Behnam told me during a recent FaceTime conversation. He is a Syriac Catholic priest from Bartella who is presently living in Erbil.

International media sources are widely reporting the liberation of Bartella as a positive indication of the Islamic State’s impending eviction from Mosul, Iraq’s second-largest city. Videos of Bartella’s once-silenced church bells have chimed joyfully on social media across the world.

Meanwhile, hopeful news reports describe the surging anticipation of Iraq’s Christians: Will they soon be able to return to their ancestral homes and churches?

The hopes are real, but the perspective from the ground is sobering. The handful of displaced Bartella residents who have managed to reenter their town, escorted by Iraqi soldiers, are apprehensive. And this includes Behnam.

Meanwhile, the safety of those who manage to briefly visit, like Behnam, cannot be guaranteed. ISIS may have departed, but building after building has been left booby-trapped with mines, suitcase bombs and other assorted deadly devices.

“ISIS has excellent technology,” Behnam told me. “They mined everything. Even Bibles.” Behnam learned about such tactics when he was able to visit the Orthodox Church of St. George, which was the spiritual home to a sizeable portion of Bartella’s Christian community. The church’s interior is demolished. ISIS vandalized Bibles and New Testaments from the 14th, 15th and 16th centuries. Terrorists ripped or cut them apart, used them to fuel the flames of their arson, and otherwise desecrated them.

In several Bartella churches, statuary was beheaded and crushed. Frescoes were defaced. ISIS mottos, such as “Enduring and Expanding,” were spray-painted across sanctuary walls, along with stenciled ISIS flags.

But perhaps most disturbing at St. George’s was a noose, hanging ominously in the courtyard, just inside the entryway. It bears mute witness to the demise of a Christian welcome center, which was ruthlessly transformed into an execution site. Countless innocent ISIS victims were murdered there.

Meanwhile, who is 100 percent sure that ISIS has been driven entirely out of Bartella?

Behnam described the oldest section of town, where enormous basements are dug beneath timeworn houses. “No one has dared to enter those underground areas, “ he told me. “And ISIS may well be hiding there.”

The Los Angeles Times quoted an Iraqi soldier who was deployed in the recent battle. “’A militant comes in from one building, takes a tunnel and emerges from another several doors down. How can we clean this place up?’ he asked, the frustration in his voice evident.

Although the troops that liberated Bartella were uniformed as Iraqi soldiers, the flags they displayed told a somewhat different story. “There were more Shia flags than Iraqi flags,” Behnam said. “Flags honoring Hussein. Or Ali. These were clearly Shia militias.”

Charmaine Hedding of Shai Fund, a nonprofit relief organization working in Kurdistan, told me that the Christian community’s problems extend beyond ISIS. “Iraq’s Christians are caught in the crossfire of a dangerous power struggle,” she explained. “Their villages and towns are located in disputed territories.

“The Kurds hope to annex the region,” she continued. “But Christians haven’t forgotten that the Peshmerga withdrew their forces just hours before ISIS invaded in 2014. At the same time, Baghdad’s Iraqi forces also want to assert control over that same region.”

And that’s not to mention the territory-hungry Turks. Or the Sunnis who once turned a blind eye to the Islamic State’s horrors.

I asked Behnam how he’d felt when he entered Bartella a few days before. He paused. “I felt insecure,” he finally replied. “And I was so disappointed. I kept thinking, ‘What can we do?’”

I asked, “So what would make it possible for Iraq’s Christians to return to their ancestral homes?”

He thought for a moment, then shook his head. “It would require massive reconstruction. And very complicated security arrangements.”

Clearly discouraged, he shook his head again and concluded, “And who will help us?”

Another story reminds us that God is an “ever-present help in time of need.” It took place in Kirkuk, Iraq – an Iraqi city that was previously thought to have been “liberated” from ISIS. Unfortunately, some ISIS fighters had remained hidden in Kirkuk after their fellow terrorists were either killed or expelled.

That made it possible – when coalition forces pushed successfully ahead toward Mosul – for the terrorist group to make a sudden comeback, staging a diversionary assault on Kirkuk.

The attack in Kirkuk, an oil-rich city located 100 miles southeast of Mosul, was initiated Friday by sleeper cells who joined forces with infiltrating ISIS fighters. They captured several buildings and engaged in gun battles with Iraqi forces, who eventually defeated them.

At 4 a.m. on Oct. 21, in a dormitory-style house sponsored by the Chaldean diocese of Kirkuk , seven college girls were harshly awakened by the sound of four men breaking down their door and heading toward their bedroom. The panicked young women grabbed their cell phones and blankets and hurriedly crawled under one of the beds. They froze in place, listening in dazed silence. It didn’t take them long to realize that the home invaders were ISIS terrorists.

Meanwhile, they could hear gunfire in the streets outside along with urgent shouts and explosions. Their quiet neighborhood had become a warzone. They offered up silent prayers, stifled their tears, and texted their families. They also SMS’d the three Dominican nuns who lived next door.

And they waited, barely breathing. The nuns, who were also hiding, admonished them to keep still, remain calm and pray.

All at once the bedroom door burst open, and two critically wounded ISIS fighters were carried into the room. One was hurriedly placed on a nearby bed. The other, groaning in pain, was laid out on the same bed that hid the girls.

He was bleeding profusely and his blood began to drip through the mattress and onto the girls’ trembling bodies.

They heard the terrorists in the kitchen, eating whatever food they could find, then rushing back out into the battle that raged outside.

Minutes turned to hours. The girls suppressed coughs and whispers. They ignored their need for a toilet. They texted. They listened to the gunfire just outside. And still they waited.

Sister Diana, a Dominican nun who has worked for years among displaced Iraqi Christians in Kurdistan, recounted the story to me in a recent FaceTime interview.

“It was a miracle. For eight hours, the girls were not discovered,” she recalled. “One of the ISIS guys even touched a girl’s leg with his foot while he was tending to the injured fighter. But he never noticed.”

As those long hours passed, Iraqi soldiers, local security and Peshmerga fighters successfully killed a number of ISIS terrorists in the neighborhood. The invaders seemed troubled as they moved the two injured fighters into another room, then rushed out.

“By that time the sisters next-door, priests and some of the girls’ family member were in touch with local security,” Sister Diana explained. “They texted that while the ISIS men were outside, the girls should very quietly leave the house, one by one, through a back entrance that had been left open.”

Of course the girls were terrified. But all seven of them bravely made their way out the door and into the house next-door.

Then, just minutes after the last girl escaped, a massive explosion rocked the neighborhood. A hurried investigation revealed that the two wounded terrorists had detonated suicide belts.

If the girls hadn’t left when they did, they would have died with them.

“They’re all still traumatized,” Sister Diana told me, “but everyone survived that terrible night.

“It was nothing less than a miracle.”

The hope of restoring Iraq’s Christians to their ruined homes and churches still seems an impossible dream to some. But for others, real optimism and a sense of expectation have begun to stir in their hearts.

For the past two years, The Philos Project’s Executive Director Robert Nicholson has devoted enormous time and energy developing a workable plan to provide Iraq’s Christians with a safe and secure homeland in Iraq’s Nineveh Plains. He has written extensively on the subject. He has also worked with the U.S. Congress to provide legislation in support of the effort.

I asked him, in view of the enormous challenges that Iraq’s Christians face in the newly liberated Nineveh Plains, what are the next steps that need to be taken? And how can America’s Christians help?

We must support Iraq’s efforts to create a new protected province – a safe haven – that will empower minorities to finally return to their homes in safety. This should be seen as a larger U.S. effort to destroy the Islamic State once and for all, and to support the Iraqi people as they rebuild.

While this is ultimately an Iraqi proposal and not an American one, backing from the United States will prompt the international community to support the religious minorities who desire to rebuild their lives in their ancient homeland.

I encourage concerned Americans to ask their elected officials to support the creation of a safe haven in northern Iraq to protect the thousands of minorities who are still facing genocide at the hands of the Islamic State. A protected province will provide these displaced peoples with a much-needed zone of stability and influence.

This article first appeared in the Philos Project.