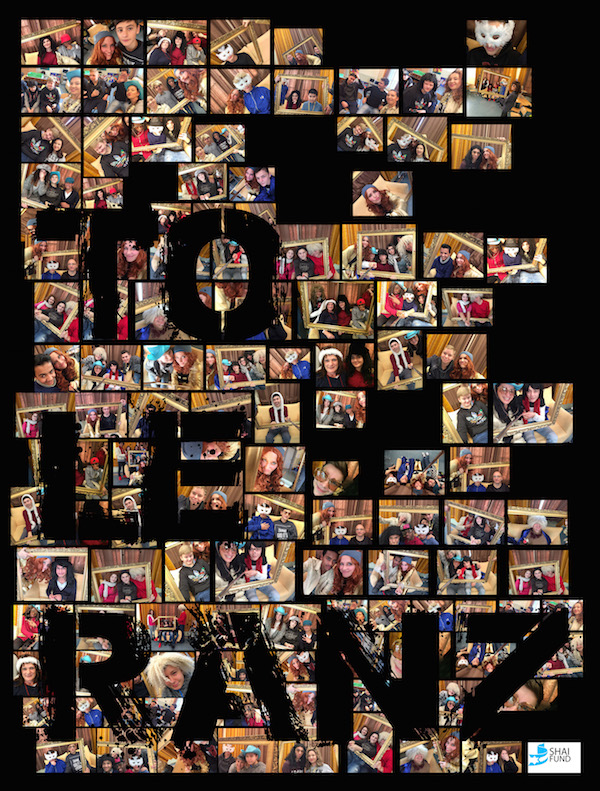 We began in a large circle, with Ralph pounding out beats rhythmically on the cajón drum in the center. The students repeated the beats that he made, using the floor, their knees, or any other kind of makeshift drum they preferred. When he started drumming, the chattering frenzy of 74 nervous 10-13 year olds that had previously filled the room fell away quickly and was replaced with harmony, on that felt ripe with curiosity, enthusiasm, and openness to the encounters the next two weeks would bring.

The faces represented a full spectrum of personalities, ethnicities, and confidence levels. In fact the group came from many different countries and spoke a number of different native languages, as half of the group had recently arrived in Munich as immigrants, or refugees.  While many students had grown up right there in Munich, some a few blocks from where we sat, others had come all the way across the world in the last weeks or months to build a new life in Germany, a culture vastly different from their own. Few, if any, of the students in this latter group had had any say in the decision to uproot from their homes and come to Germany, and what exactly they witnessed along the way was unknown to us. What we did know, though, was that Munich was the last stop in a very long, difficult journey for them—probably a place that had existed in their imaginations long before they set foot here, as their parents worked, prayed, fought to make it possible. This last physical stop, however, was only the beginning of another road for each of them, that of trying to make this place into his or her place—hence the name of the project, “Mein Platz.”

The theme of this initiative—bringing together students, therapists, trained volunteers and creative professionals—centered around what it means to share a space, to make it one’s own, but also to help make it a home for others and accept that their concept of home may look different than one’s own.  These are complex questions, but the ones that these fifth graders were about to confront together, through the arts, over the course of the next weeks.

It was the end of the school year for them; the students from Maximilian-Gymnasium (Maxgym) had just finished their first year in a new school and their final exams, and the students from the Integration Class at Mittelschule am Wintherplatz had spent the last months working hard to learn German and the other subjects necessary in order to, eventually, join in the classes with the other German students. In short, they were quite ready to express themselves through different means than reading, writing and studying, and had a lot to process, whether they knew it or not.

After the (quite epic) drum-circle introduction brought to us all by the musician on the teaching team, the students were split into five subject groups: Dance, Painting, Film, Music, and Body-Work. Each of the groups was divided half and half between students from Maxgym and students from Wintherplatz. The natural instinct for most, of course, was to stick closely to those they already knew, who spoke the same native language, or felt culturally familiar. The projects in each group, however, absolutely required making things together as a cohesive group, thus mixing up cliques and categories. This played out in some beautiful, surprising ways through the various mediums—whether in overlapping paths of color on large-scale collaborative paintings, interacting hand-drawn figures in the stop-motion film, drum circles, human knots, or giant dance parties.

Different students had special connections with different subjects—bringing in contributions, such as instruments or traditional dances, from their home countries, and bringing forth skills that they had not yet had the chance to share with their peers. Every two days, the students moved to a new subject group (except for Film which remained the same because of the level of training required) and performed or displayed what they had made during the last days. These were special moments, as they worked up the confidence to talk about the paintings and figures they had made, or to show their one handed cartwheel as part of the dance routine. Each time the end products for each subject were unique, as the teachers were convicted that the art should arise from the students, that the group’s dynamics and personalities should determine the choreography or composition. This was one of the most impressive aspects of the project from my view. It is much easier said than done—that is, to really provide the creative space and the functional tools, for the ideas to come from the students themselves, and for them to learn how to integrate their ideas with others’ to make a collaborative work. But these teachers had experience with it, and provided working models that produced products that showed the equality and intentionality of the process.

The group as a whole clearly evolved over the course of the project. On the one hand, it quickly became clear which students were still suffering from severe effects of trauma and the teachers and volunteers maintained close communication with the students’ school teachers, and each other, in order to know how to best serve these students. The professionals and volunteers—who had received some training ahead of time—worked on the question of what belonging can look like for such students, who struggle to feel at home in their own minds, let alone their new context, due to what they have been through, and at such a young age.  But it was especially powerful to see how the students engaged in this process. Sometimes it went better than other times, of course, but they were also figuring out how to make space for students who needed more, or invite in students who hung out on the sidelines. As Daphna, the Body-work teacher shared, “The necessity for belonging is a basic and essential need for successful integration in [a] new society and culture.” Learning to tolerate, even work alongside, others when one does not fully understand them or the way the act at times is an essential process in growing into citizens who can contribute to a peaceful, tolerant, even welcoming society that is equipped to face the changes that a globalized world brings. This kind of learning, however, rarely effectively happens through top-down classroom teaching. It is experiential learning that happens best through collaboration and exchange, and requires a focused quest for ways of understanding one another.

For many students, with each transition to a new subject, we could see a new level of openness, of confidence, could see the new friendships budding and ideas developing. The two weeks culminated in a big presentation of all of their work and creations, to which their families and peers in the school were invited. The Wintherplatz integration class teachers shared with us that they saw a number of the students open up and express themselves in ways they had not yet seen during the months with them in the regular classroom. They expressed how important the arts are for them, and how they wish they had more of it in their regular schedule.

There is no doubt that this time (pre-adolescence) is a very vulnerable age for anyone, but particularly for those recently introduced to a completely new context in which to live and grow. It is known that child-immigrants are particularly at risk of becoming a high-risk, isolated population. The immigrants and refugees participating in Mein Platz are still at the point of forming their first memories and impressions of the place they now find themselves. If they have good and self-esteem building experiences rather than destructive ones, if they feel like it is possible to build equal relationships with members of the dominant culture and recognize that they have positive and valuable skills and ideas to contribute, that they are accepted and welcomed, if they have experiences of success in a place early on, this will have significant effects on the shape that their future in that place will take. Furthermore, those students from Maxgym were able to experience first-hand, that these students who had just arrived in Germany from around the world were, in fact, just kids like them. Maybe they had different ways of speaking and expressing themselves, but they had interesting stories, and beautiful art forms and, after two weeks together, many of them felt like friends. This is the hope  as I see it. Psychologists talk about “the power of a positive memory.” Of course these two weeks are not enough to shape the entire integration experience, but I do think that this comprehensive model—that recognizes that multi-faceted nature of human persons, and the psychological, sociological dimension of the integration process—is vital in providing foundations for first-hand experience, for positive memory formation, that will set students on a course shaped more by genuine understanding than by fear.

Submitted by: Megan Mitchell, Art Therapist and Volunteer for My Space.

Thank you to our donors for this project: Stadt Kultur Bayern, Brodt Foundation & ICEJ Germany.