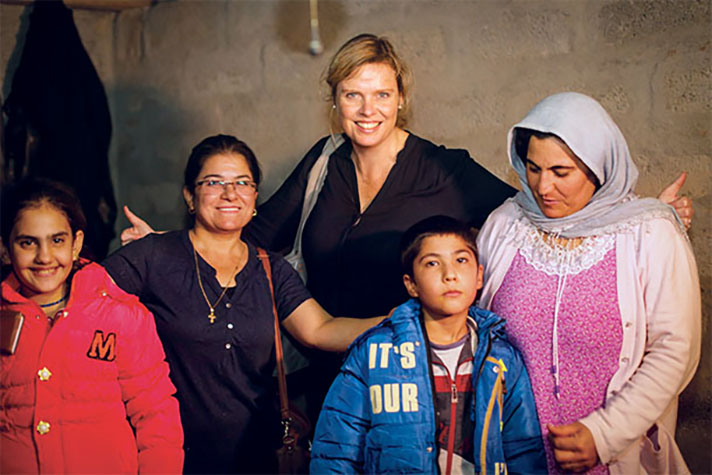 If One Part Suffers

Charmaine Hedding vividly recalls media coverage of Islamic State militants bringing their bloodthirst to the Nineveh Plain of Iraq in August 2014. Christians whose families had lived for two millennia in that region fled in droves. Those who couldn’t flee were executed or enslaved. Nonconforming Muslims suffered similar fates.

Entire towns and villages were deserted as Christians moved to safer regions hundreds of miles from the scourge of ISIS.

“I remember watching it on television and seeing the suffering,” Hedding said. “I had been informed about what was happening. And I felt God saying to me, ‘Part of your body is suffering. Will you do something about it?’”

Hedding, who will be participating in the World Summit in Defense of Persecuted Christians in May, said she was mindful of 1 Corinthians 12:26: “We are one body, and if one part suffers, every part suffers with it. If one part is honored, every part rejoices with it.”

In more than a decade of international human rights work and as founder of a nonprofit that aids persecuted Christians and others in dire straits, Hedding had worked in political hot spots throughout Africa and in many parts of the Middle East. But not in Iraq.

“I didn’t know how I was going to do it, but I knew I couldn’t merely stand by,” she said. “Six weeks later I was in Iraq, and with God’s miraculous help had raised enough money to go in and work with the Christians who were still on the streets and living outdoors, in parking lots and unfinished buildings.”

As ISIS invaded Iraq, they desecrated or destroyed anything symbolizing Christianity; they used church buildings for target practice, ransacked Christian gravesites and destroyed ancient relics. In the last few months, an American-backed, Iraqi-led force has driven ISIS from much of the region and now is fighting for control of Mosul. But before ISIS abandoned some of their strongholds, they sabotaged the homes of many Christians, leaving refrigerator doors, ovens, cooking pots, even toys, rigged for maximum carnage.

Hedding’s strategy, whenever possible, is to work with local church groups in countries where her nonprofit, the Shai Fund, operates, and to link arms with other like-minded nonprofits when beneficial. Her group has helped with a range of needs, from providing urgent relief aid for displaced mothers of young children, to starting a bakery among refugees and using it to teach women how to earn money in lands far from their homes.

“For the persecuted Christians in Iraq, Syria, Turkey and elsewhere, the biggest help is not actually how much material aid we bring, even though that is needed, but that we come. That we come to be with them in their suffering.”

Hedding’s group is also working with children who fled ISIS and ended up in refugee camps. To help alleviate trauma, the organization is providing psychologists to help children process their experience and help them get ready to attend school-—which they often are shut off from as refugees.

Hedding grew up in South Africa during apartheid in an Assemblies of God pastor’s home. The family was persecuted for her father’s opposition to that segregated system before they moved to Israel when she was 13. Because she speaks Hebrew, she can communicate easily with the Aramaic-speaking Christians from the Nineveh Plain.

Her nonprofit is named for the Hebrew word for gift—shai, and she aims to bring the gift of hope to those who are suffering.

“For the persecuted Christians in Iraq, Syria, Turkey and elsewhere, the biggest help is not actually how much material aid we bring, even though that is needed, but that we come. That we come to be with them in their suffering,” Hedding said. “That they are not alone and that the West hasn’t forgotten them.”

The gift of hope from one person to another is powerful anywhere, Hedding said. It was true in Hedding’s former career when she helped turn around struggling retail stores in the business world, and it’s true in the tribulation of desperate people. Christians, especially, have that gift to offer, and Hedding said that America typically “has been a bastion of light in this regard.

“If I could say anything to America, do not forget your heritage, because what you’ve done in advancing freedom and human dignity has really, really been a light to the Christians all over the world. Continue to do this.”

Although ISIS is the most pressing visible threat, fundamentalist Islam will be an ongoing challenge even if ISIS is eliminated, Hedding said.

“It is a fight of a different ideology and a different worldview. At the end of the day, those of us who stand for what’s given us the greatest freedom—that being Judeo-Christian values—we must realize that this is something worth fighting for and we should not lose it by being passive.” ©2017 BGEA

This article was first published in Decision Magazine by Jerry Pierce, 17 April, 2017.