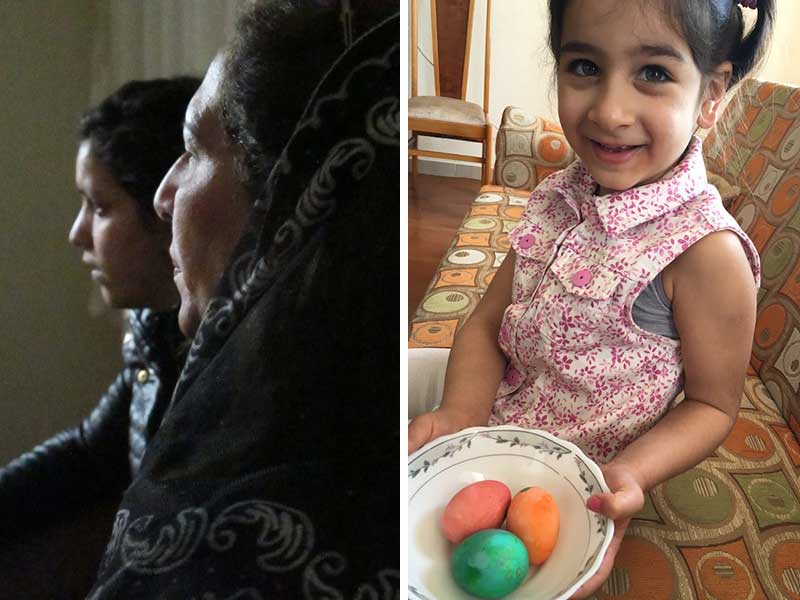 Celebrating Easter with the Christians in Turkey that fled their homelands

The scene is the same in almost every city. A house filled to the brim with religious minorities, mostly families, from Iraq and Syria. They have fled Islamic jihadis belonging to ISIS and other Islamic groups committed to the establishment of the Islamic Caliphate in Iraq and Syria.  Some are Chaldeans others are Yezidis or Mandaeans and many more.

The families wait for our arrival, calling frequently to find out where we are on the road toward their Turkish city.  There is often a long drive from one city to another, as Turkey spreads out their refugee population rather than having everyone in Istanbul. We drive up to 8 hours a day to reach them along mountain passes and coastal routes. Some have as many as 50 families while others have three or four. We know that none of the implementing partners of the government or of the UNHCR ever reaches these communities as they are just too far away.

We bring them cards loaded with Turkish lira that will allow them to buy food at the local supermarket.

Often religious minorities face difficulties living as refugees. One husband tells us that when he took his wife to hospital and they saw that she was wearing a cross; they told her to put it away out of sight. The children experience pressures to convert at school too and subsequently don’t attend school. One of the refugees tried to rent a house in the local town. The landlord told him, laughing, that his Turkish grandparents had chopped the heads off of Christians like him, and tossed the heads into the sea.  The symbolism was not lost on the refugee especially as his family fled ISIS because they are decapitating the heads of Christians that did not escape, people he knew.

One of the fathers stands in front of us weeping. He tells us how they fled and lost everything. How hard their stay in Turkey has been for the past two years. How their documents say that they will only get an interview in 2021 with the UNHCR to leave to Canada or Australia or anywhere that will take them. Seven years of waiting.

And he thanks us for coming, for bringing Jesus to them today. "Though he is always with us," he tells us, "we have seen him again through your being here with us today."

Working through the local church we traveled to ten different cities and were able to help 1000 people over two months with food cards.