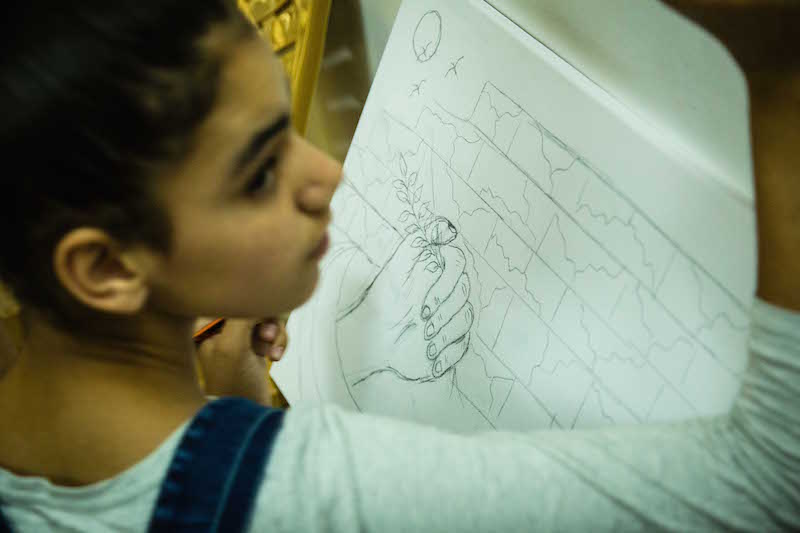 for Children in Iraq

Art therapy for Children in Iraq

This Non-narrative Psycho Social Program has benefited persecuted Christian minority children age 10-14 years that are displaced in IDP camps in northern Iraq. The children are all Chaldean-Syriac-Assyrian Christians that fled from Mosul and the Nineveh Plains on August 6th, 2014. Most of them are living in caravan camps, broken down buildings and sharing small apartments in the Christian enclave of Erbil called Ankawa, northern Iraq.

Of the 1.5 million Christians estimated to be living in Iraq in the year 2000, less than 250 000 remain of which most are displaced. Among them there are estimated to be around 35 000 children.  These communities are characterized by a sense of loss of security, unpredictability and the lack of structure in daily life. Their family and social networks have been shattered. For the children this conflict represents a fundamental alteration of the social ecology and infrastructure, which supports the child’s development, in addition to the on-going risk of personal physical endangerment.

The project is an art therapy trauma program designed to address the non-verbal core of traumatic memory to improve resilience and the mental health of children. The project works with local Christian grassroots community based organizations to develop a program whereby expressive activities such as art and drawing, will act as a secondary medium through which children can communicate their thoughts, emotions, feelings and hopes. For example, a child who cannot describe the fear experienced from viewing an act of violence can draw what he or she saw and express his or her fear through their drawing. The drawing can later be used as a vehicle for non-verbally communicating and exploring feelings or meanings.

This project has run for the year of 2016 and has assisted 30 children every school term, with your support we can continue it.